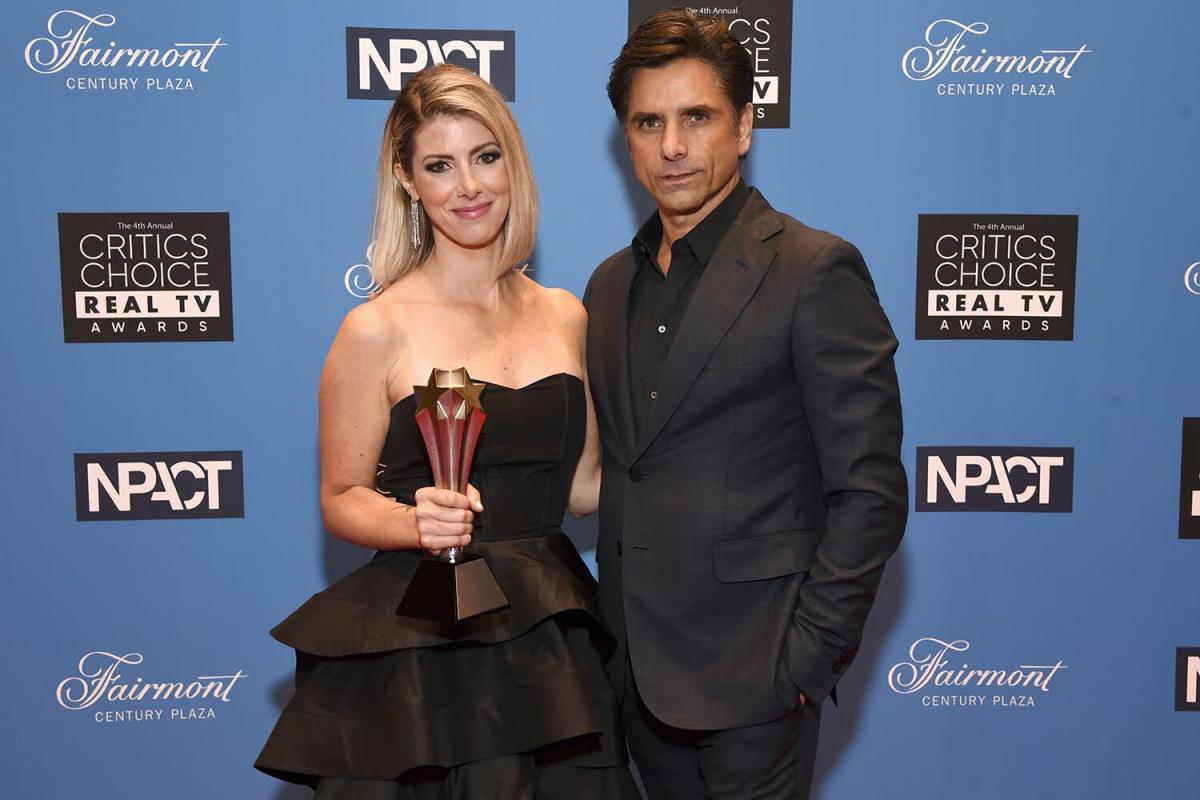 Bob Saget’s life and legacy was honored on Sunday, five months after his unexpected death.

His longtime friend and full house costar John Stamos was on hand at the Fairmont Century Plaza to present the honor, a career achievement trophy given for performers with a long legacy of accomplishment in nonfiction, unscripted and reality television. Saget’s widow, Kelly Rizzo, accepted the award on behalf of her late husband, who died on Jan. 9 to age 65.

On the red carpet, Rizzo spoke to PEOPLE about how proud the honor would have made him, praising his work as host of America’s Funniest HomeVideos.

“He was one of the pioneers in the reality TV world,” she explained of the long-running series, which Saget hosted from its debut in 1989 through 1997.

“It’s just so special to be here to honor him, but also still so weird and surreal at the fact that he’s not here,” she added. “This is the first red carpet I’ve done without him. It’s very strange. I feel like he’s waiting in the wings and he’ll be like, ‘Honey, I’ll be there in a few minutes.’ It still does n’t feel right, but all we can do is our best and be here to celebrate him and his legacy. That’s all I want to do.”

Rizzo echoed those comments in her emotional acceptance speech, calling his role as the Squiggly Monster on The Masked Singer as “my favorite character ever that he did besides Danny Tanner, of course.”

“It’s so wonderful to see how incredibly loved he still is by everybody, and I know that Bob would be so honored and so thrilled and so grateful to receive this award right now,” she told the crowd. “I mean, he would be blown away. All he wanted to do was make people happy. He just wanted to make people laugh, and make people smile.”

“Bob’s incredible daughters and I are so honored to be able to accept this on Bob’s behalf. And this is very bittersweet, because this is just still… It’s so surreal,” Rizzo, 43, also said, pointing to a video package of Saget’s career that played before she took the stage. “You watch that, and you look at him, and you’re like, ‘Bob was larger than life.’ He was so full of life. He was a force of nature. And you watch that, and you’re like, ‘How is he not the one that’s on the stage right now?’ It still doesn’t make sense. It still doesn’t really compute.”

Stamos, in his speech, talked about Saget’s lasting legacy on both the industry and his own personal life.

“As a director, producer, actor, standup comedian, and New York Times bestselling author, Bob was successful in every medium of media,” Stamos, 58, said. “A lot of colleagues … were charmed by his humor, his intelligence, and his open expression of love for family, friends, and his fans . Known as a comedian’s comedian, he was both a family funny guy, and an aristocrat of dirty jokes. The outpouring tributes from the filthiest comments to grandmothers in the Midwest showed just the range of audience that he had adoring him.”

“Fortunately, his legacy lives in my life. The guy taught me how to love deeply, fully allowed me to find such joy and such gratitude in my marriage and my father,” Stamos said. “Tonight’s Critic Choice Real TV Impact honor only affirms what we all know about Bob Saget’s grace and his goodness from him.”

He also joked about how Saget would feel about the honor.

“Bob Saget was the biggest self critic I ever met. He questioned every choice. He thought about every project he did,” Stamos said. “Imagine his surprise ele, as he looks down on former world industry insiders lauding his 12th content creation in the world of entertainment and nonfiction with none other than the Critics Choice Real TV Impact Award.”

RELATED: Bob Saget Looked to His Future Success in One of His Final Interviews: ‘I Think I’m Just Starting’

Saget hosted the inaugural NPACT Impact Awards (now the Critics Choice Real TV Awards) in 2018. The awards were created to honor and recognize excellence in nonfiction, unscripted and reality programming across broadcast, cable and streaming platforms.

“It’s so interesting for this to come so full circle,” Rizzo told PEOPLE on Sunday. “I remember that like it was yesterday when he hosted these awards. It’s very special to see him recognized for his body of work in general, but then something that is a little bit off the beaten path from what you would typically consider him as just actor, comedian.”

In a press release, the Critics Choice Association (CCA) and nonfiction producers’ organization NPACT said Saget was a no-brainer for this year’s award, pointing to his illustrious career, which included starring in two of the most family-friendly shows network TV has ever produced: full house and America’s Funniest HomeVideos.

RELATED: All the Funniest and Most Tearjerking Moments from Bob Saget’s Netflix Tribute Special

Saget died following a standup performance at Ponte Vedra Concert Hall in Orlando, Florida. An autopsy later revealed he had died from head trauma consistent with some kind of fall.

Never miss a story — sign up for PEOPLE‘s free daily newsletter to stay up-to-date on the best of what PEOPLE has to offer, from juicy celebrity news to compelling human interest stories

In the weeks and months following the full house star’s death, loved ones continued to pay tribute to the late comedian on social media, remembering him for his ability to make everyone feel special and loved, amongst other notable qualities.

On May 17, what would have been Saget’s 66th birthday, Rizzo and Stamos both honored Saget with touching tributes on social media.

“These pictures and videos were taken exactly 1 year ago in Mexico. We always celebrated our birthdays together with a trip,” Rizzo, who married Saget in 2018, wrote in her post. “This last trip was so special. We both celebrated each other so big. You never know when something is going to be ‘the last’ time. But I’m so grateful that he was showered with all of the love he deserves.”

“I pray he can see all of the love he’s already getting from around the world today. Honey, everyone loves you so damn much,” she continued. “You are one of a kind and you certainly made my world go ’round. I love you more than anything and miss you every minute.”

Stamos’ post featured a smiling photo of him and Saget by the beach for the occasion with the quote from legendary actor Jack Lemmon. “Death ends a life, not a relationship,” he wrote, before adding, “Happy Birthday Bobby. I miss you madly.”

Sunday’s award presentation took place two days after Netflix released Dirty Daddy: The Bob Saget Tribute, a celebration of life for Saget, which was filmed three weeks after he died. Rizzo and Stamos were among the stars who made appearances on the Netflix comedy tribute special.