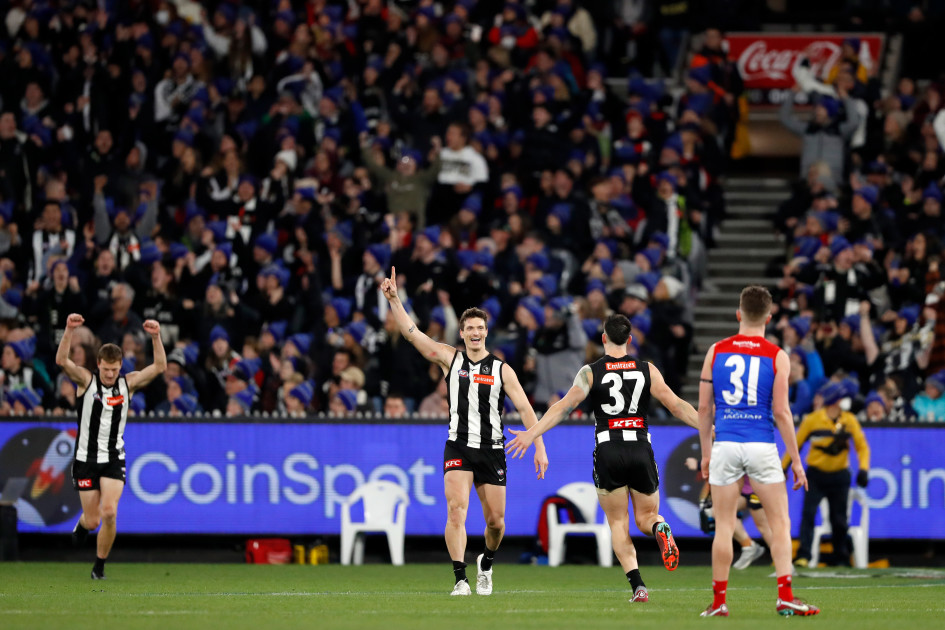 Collingwood has blown away reigning premier Melbourne with a blistering six-goal final term to earn one of the wins of the season at the MCG.

Fans returned to the Queen’s Birthday clash for the first time in two years on Monday afternoon, and the 76,059-strong crowd was treated to what was a battle of the titans.

The MCG has hosted some enthralling clashes in 2022, and the Pies’ 26-point win over Melbourne will certainly go down as one of the best.

After a disastrous week off the field, the Demons weren’t able to unite in the final term and now head into the bye off the back of three consecutive losses.

So unforeseen has been Melbourne’s final month, they’ve now been awarded top spot of the ladder to Brisbane given the percentage loss from the final margin on Monday.

Having been the only side not to lose to Melbourne in 2021, the Magpies were desperate to do the same again.

However, despite breaking down the Demons’ system on multiple occasions, the Pies struggled to convert early, heading into the first break with 0.5.

Despite the even nature of the opening term (minus the scoreboard), Clayton Oliver put forward a case for the best quarter of the year with 16 disposals as a dominant midfielder.

He finished with 43 touches, including a further 11 in the final term to claim the Neale Daniher trophy.

As the Pies clawed themselves back following the first quarter setback, Mason Cox’s influence increased to play his best game of the season.

After missing gettable chances early, Cox spent time in the backline and was rock solid while rotating in the ruck, combining with Darcy Cameron to provide strong opposition to the renowned Max Gawn/Luke Jackson duo.

Those two underpinned Collingwood’s rise through the second, third and fourth terms, combining for 36 disposals, 11 marks and five clearances at the final siren.

Cox especially showed the type of form that downed the Tigers in the 2018 Preliminary Final, only narrowly missing out on best-on-ground honors.

Despite edging closer, they entered the final break two points down. However, it was in the final quarter when the game broke open.

Moments of brilliance saw Collingwood kick the first two of the quarter, but Brody Mihocek snagged the first of the term and then the sealer to step up and secure his side a spot in the eight.

“One of the best wins, if Collingwood can get there, that I’ve seen for quite a while,” Dwayne Russell told AFL Nation after Mihocek all but iced the game.

“Yeah, it’s against Melbourne on the ropes, but it’s still against the reigning champs at the home of footy.

“This premiership is up for grabs.”

“It’s been a thumping this final term.”

One of the loudest Collingwood chants echoed around the ‘G as Jack Crisp and Jamie Elliot slammed home the finals goals, and it’ll be a game Pies fans won’t quickly forget.

On the flip side, it’ll be a final term Dees fans can’t forget quick enough.

Captain Max Gawn struggled to play out the game after being hampered by numerous knocks, while James Harmes may also have a quiet week after copping a knock to the ribs in the final term.

Debutant Daniel Turner was also concussed but is blessed by the club’s bye next week.

Brisbane, Melbourne and Fremantle are all now tied on 40 points at the top of the ladder, marking the most even the season has been all year.