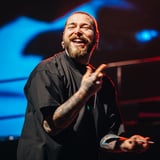 It’s an exciting time to be Post Malone. During an appearance on “The Howard Stern Show” on June 13, the 26-year-old rapper revealed he recently welcomed his first child and got engaged. While talking to Howard Stern, Malone casually said that he “kissed” his “baby girl” before heading to the studio, which prompted Stern to ask about her arrival.

“That’s been on the QT, though? We didn’t know you had a daughter, right?” Stern asked Malone, per E! News. Malone said he prefers to have those closest to him make their “own decisions” when it comes to making announcements about their lives, which is why he didn’t reveal any further details about when his daughter was born or when he got engaged.

His fiancée’s identity hasn’t been revealed, although it’s been reported that she’s not in the public eye. Malone previously dated show promoter Ashlen Diaz for about three years and was linked to another woman in August 2018.

Malone first announced that he was going to be a father back in May 3. “I’m excited for this next chapter in my life. I’m the happiest I’ve ever been,” he told TMZ. “Time to take care of my body and my family and friends and spread as much love as we can every day.”

In addition to expanding his family and getting engaged, the rapper is also celebrating the recent release of his third studio album, “Twelve Carat Toothache.” The project debuted at No. 2 on the Billboard 200 on June 3, with a deluxe version dropping on June 7. Malone is also set to release a cassette edition on June 24 and a vinyl edition next year. Congrats to Posty!