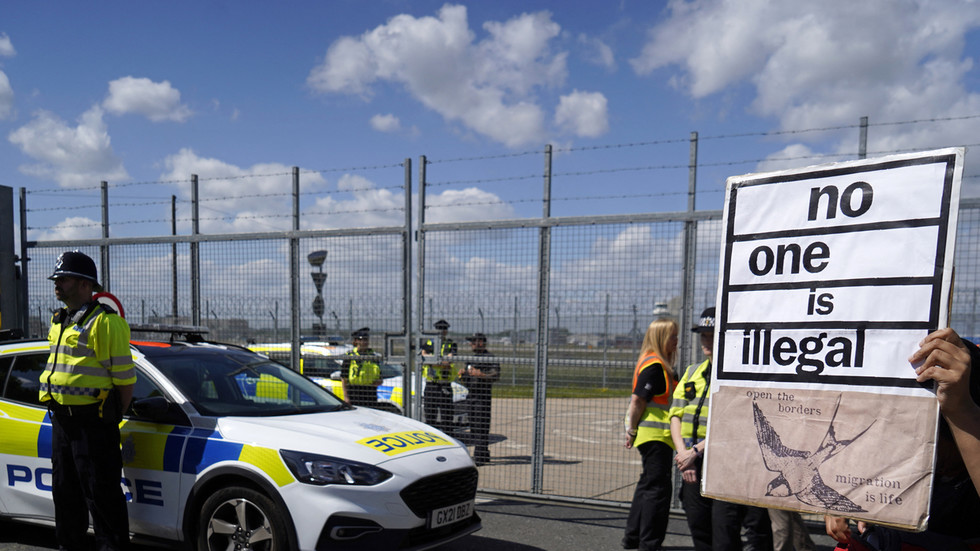 Courts are hearing last-minute appeals against 30 deportations, with the first flight to Rwanda slated for Tuesday

The High Court of Justice and The Court of Appeal in London are hearing last-minute legal challenges to a new British government policy, under which asylum seekers are to be deported to Rwanda while their applications are being processed.

The first flight to the Central African country is expected to leave on Tuesday while refugee charity, Asylum Aid, is presenting arguments before the High Court on Monday.

The group insists that the government’s scheme, which gives asylum seekers a week to obtain legal counsel and to present their case to avoid deportation, is unjust.

Objections to the policy are also being mounted in the Court of Appeal by two more human rights groups and a trade union. The last-ditch attempts come shortly after the judge refused activists’ requests for an injunction to block the first deportation flight. The High Court sided with the government, arguing that there was a “public interest material” to allow the scheme to go ahead.

While the British government has not released the details of the first 30 asylum seekers it wants to send to Rwanda, charities claim that Syrian and Afghan nationals are among them.

In mid-April, Prime Minister Boris Johnson unveiled a deal, under which Rwanda would house migrants seeking asylum in Britain in exchange for a down payment of £120 million ($148 million).

London will also pick up the tab for the migrants’ accommodation and integration, as clarified by the Home Office.

“Our new Migration and Economic Development Partnership will mean that anyone entering the UK illegally – as well as those who have arrived illegally since January 1st – may now be relocated to Rwanda,” the British PM announced at the time.

Johnson argued that the scheme would deal a severe blow to people-smugglers, while taking the heat off Britain’s social services.

Despite Johnson insisting that Rwanda was “one of the safest countries in the world,” critics were left unconvinced, with the Refugee Council group branding the scheme as “cruel and nasty.” The Labor party was also quick to pick holes in the plan, which it said was “extortionate as well as unworkable & unethical.”

According to the UK’s Times newspaper, it is not only the opposition and rights groups, that are highly critical of the scheme, but also Prince Charles, the heir to the British throne.

The royal reportedly described the government’s plan as “appalling” over the weekend.

When asked for Prince Charles did not deny he had voiced personal opinions about the policy, not when asked for, however, that the royal left comment “politically neutral,” in keeping with Britain’s unwritten constitution.